Welcome to of encyclopedia on Imamah and Wilayah (Imamatpedia) 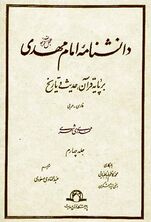 Read more
Featured Q & A
To date, have any of the signs of Imam al-Mahdi's reappearance actually come to pass?

Signs of the reappearance of Imam Mahdi (a), as narrated, fall into two categories of mutable and immutable. An abundant number of narrated traditions report that five of these signs are immutable in nature. These are: the uprising of the Sufyani, the uprising of the Yamani, the celestial proclamation that shall come from the sky, the killing of Nafs al-Zakiya, and the sinking of the earth at Baydah. The mutable ones include: Persistent and successive rains at the threshold of the Imam's reappearance, irregular instances of solar and lunar eclipses prior to the Imam's return, widespread deaths, earthquakes, wars and pervasive unrest and turmoil etc. Neither of the immutable signs have come to pass, nor can there be any definitive discussion regarding the mutable ones.

The reappearance of Imam Mahdi (a) constitutes the single most illustrious incident within the history of humanity. As such, and without even an iota of doubt, there exist numerous signs for this great event mentioned within the narrated traditions of the Infallibles (a).